When we flew into Seatac the folks sitting behind us the plane offered us lots of advice on where to go and what to do. One of the things they told us was to make use of the Washington State Ferries. As we’re home-swapping the folks from Olympia had also mentioned the ferries so today we thought we should take them up on the advice and go visit one of the islands, served by the state transport system; it was great advice. We have spent the last few days being busy busy busy and we’ve spent a lot of time driving. As we’ve only just retired we’re still getting into the mindset that we don’t have to fill every day and it’s ok just to amble along sometimes. Today was one of these days and yet it turned our to be a little treasure.

Washington State Ferry is the Best!

We searched on line for the closest ferry departure point and it was really just a case of sticking a pin in a map. The Ferry to Vashon Island left from Port Defiance and for just a few dollars we drove on and sat back and enjoyed the view. The crossing was only 30 minutes but the water was calm and the sky so blue, we stayed on deck and searched for whales who are frequently spotted in the Sound.

The Puget Sound is the enormous inlet of the Pacific Ocean that we’ve been exploring the last week. It serves today as a border between Canada and the USA and is home to 176 named islands and many more unnamed islands. Whales and dolphins and seals live in the waters year round and you also spot numerous sea birds, Bald Eagles and the salmon fishing is pretty good too! We came to Olympia for the mountains but we’ve just been blown away but the stunning coast line and today the weather afforded us views of the mountain we’d come to see; indeed today it felt like we would be constantly in the shadow of the majestic Mount Rainier.

Take a Drive to Maury Island

We had no plan today. We simply wanted to see as much of the island and her coast as we could. We looked on the map and decided to drive out the an attached island called Maury (there’s a village in France that sells a Port like wine with the same name). We headed to Point Robinson Lighthouse, a 10 acre park located on the easterly tip of Maury island. The lighthouse has been a beacon in the fog since 1885 and the park includes an extensive sandy beach that wraps around the point.  There are walking trails, a few picnic tables and benches along the shore, the perfect place to take a picnic with dramatic views across the Sound’s East Passage, Tacoma, with Mount Rainier behind.

There are two restored Keepers’ Quarters here which could be used as a holiday rentals; I can vouch for the views and we both said it would be the perfect place to come for a few days away from it all holiday. We decided to skip the picnic tables and found a spot beside the water on one of the enourmas trees that had been washed up on the sand.  We munched on our sandwiches, had a cup of tea from the flask and just enjoyed the view!  Once we’d eaten (and made sure that we’d left No Trace) we wandered around the point, reading the information boards about the whales that inhabit the waters here.

We carried on our journey around the island, using google maps as our guide we followed all the roads that we could, stopping at view points or driving down roads that led to the coast. All roads eventually lead you inland into the main town and we decided to stop and take a look.

If you are a fan of the Gilmore Girls then you would be right at home in Vashon. The main street is lined with little artisan shops, gift shops and book shops and coffee shops. Vashon is one of the largest islands in the sound but the town feels like a village. Reading the notice board outside the supermarket it looked like there was plenty to keep the residents occupied, with book clubs and yoga groups and painting classes; Vashon feels like a place you put down roots and be very content with life.

We had a coffee at Anu Rana’s Kitchen; we stopped mainly because we spotted the Nepalise Prayer flags but it was adctually the most perfect place for me as they served lots of both Gluten Free and Vegan! We sat in a corner and people watched and enjoyed coffee and almond and chocolate cookies.

We wandered up and down the main street, stopping in all the little curiosity shops. At the local radio station there was a really poignant reminder of the sadness that COVID has left in it’s wake. A huge display of hand folded origami birds called ‘The Forest of Lost Souls’. Every bird represents a death in this community from COVID, the total stood at 3,086 in September 2022. What was more heart breaking were the boxes piled high beside the ‘forest’ with more birds, representing those who died since the Forest was created. It was a stunningly simple yet beautiful memorial and we walked away in silence.

After exploring the town we headed back to the coast and followed google maps again along as many roads as we were permitted. Inspiration Point, Paradise Ridge, Dockton and Burton were all visited but we ended our day at Lisabeula. Another conservation area, a 5 acre park that offers picnic benches and a sandy beach for sun bathing. The park is named after Eliza and Buelah Brink, the two daughters of the first Postmaster here in 1892.

As we arrived most folks were packing up for the day and the sun was sinking lower in the sky but we still enjoyed a stroll along the crystal clear waters edge before heading back to the ferry point for the journey home. 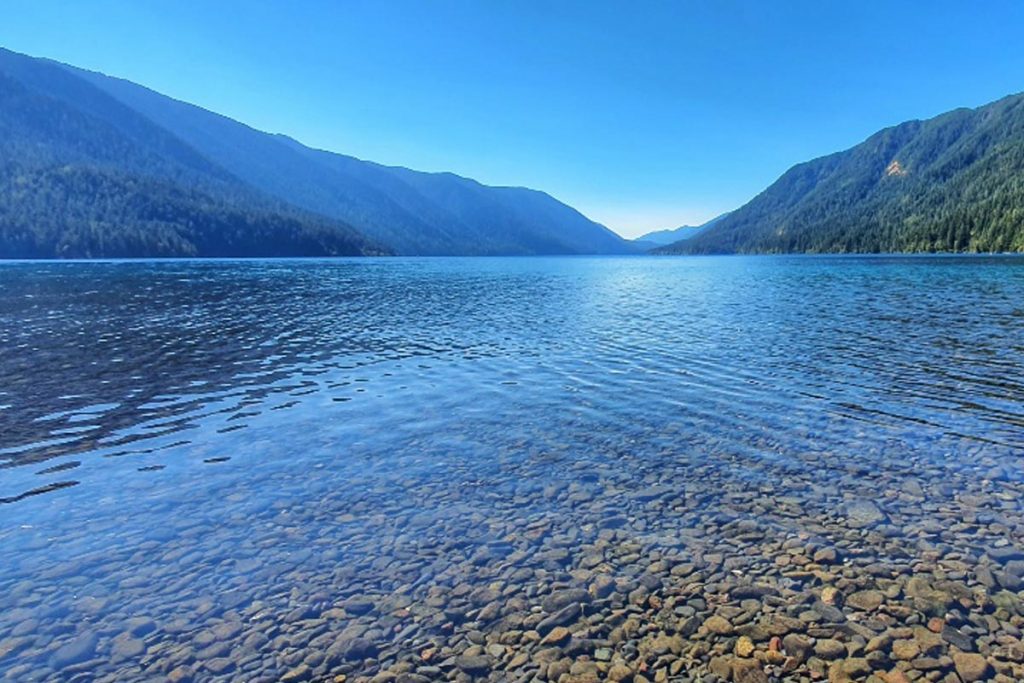 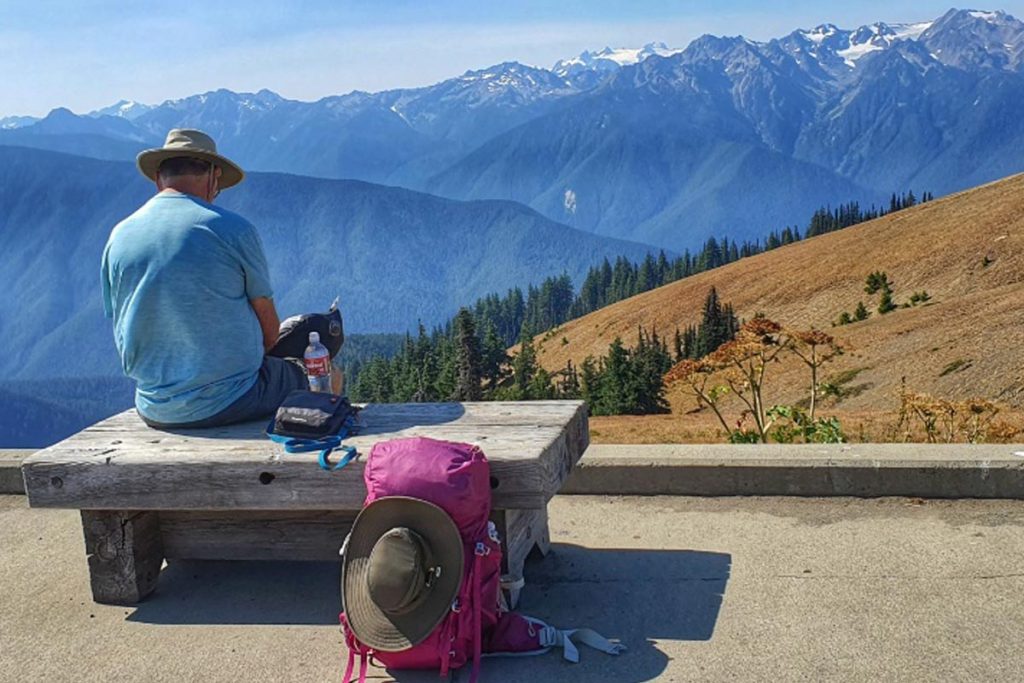 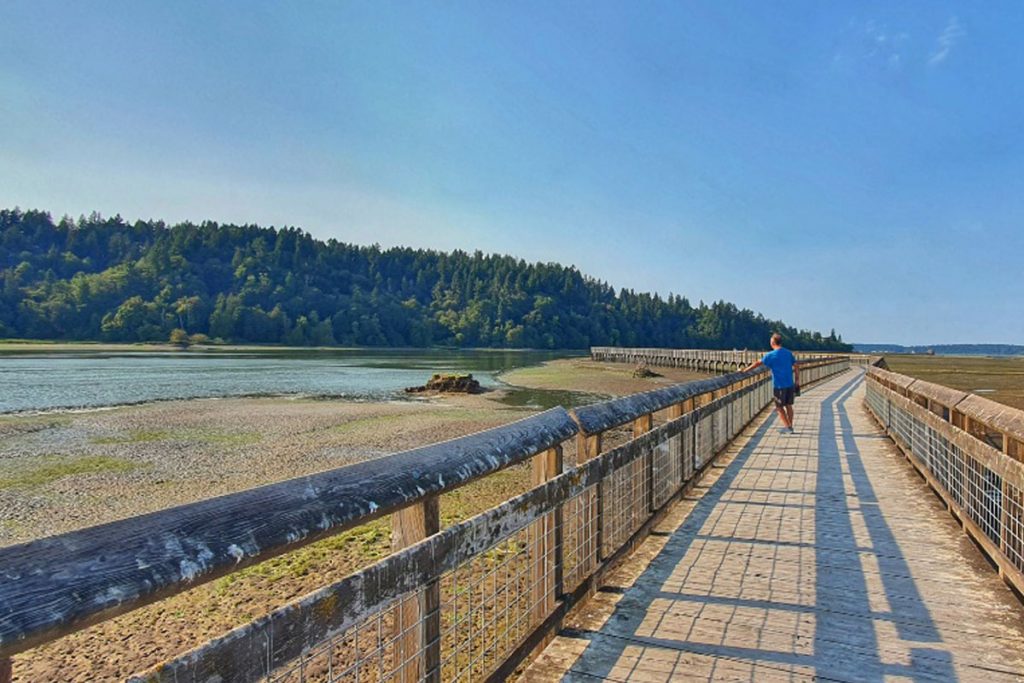